Gokak Falls: A natural beauty worth visiting near Belgaum

At the distance of about 10km from the Gokak town, there lies a beautiful waterfall named Gokak Falls.
Gokak Falls is one of the magnificent waterfalls in the country, it is also named as “Niagara Falls” of India. This waterfall looks beautiful because of its unsettling water effusing over the rock beds and down to a fall of 170Ft.

When the Ghataprabha river after traveling through long-distance comes to the rocky beds of Gokak, here the waterfall is formed, having a height of 52 meters when falling into Gokak valley, it forms a shape of a horseshoe at the crest.
The width of Gokak Falls is 177 meters, during the rainy seasons’ waterfall speaks for itself, a dull roar could be heard from some distance due to increased water flow.
Below you can see the Gokak falls in rainy seasons. 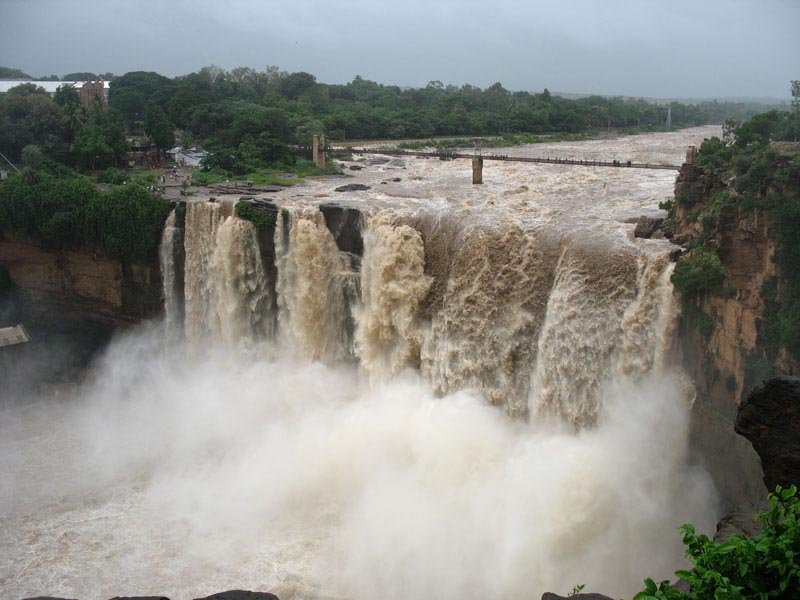 In this picture you can easily see the hanging bridge on the river Ghataprabha, the bridge lies 14 meters above the rocky bed and is 200 meters in length, from here you can easily enjoy the elevated view of the waterfall.

You would be surprised to know that, for the very first time electricity in India was generated here in 1887 and you can get to this small electricity generation plant through the ropeway bridge, which is truly an exciting experience.

Gokak falls preserves historical monuments on both banks belonging to the Chalukyan era. You can see there on the riverfront, the Mahalingeshwara Temple depicting Chalukyan style of architecture.

Gokak is the town located at the junction of two rivers, Ghataprabha and Markandeya, from one side it is surrounded by a range of hills and by plains of black soil on the other side. Gokak is one of the largest producers and exporters of yarn in India.

Gokak was founded in 1853 and it got its name from the Goki tree which grows in abundance in the region. It is not an anglicized name.

You can also find the term Gokak in the titles of many people like the famous scholar V.K Gokak.

In the 16th century Gokak Kotwals used to rule the town and because of several disputes, had fought a battle with the Rani Abbakka at that time.

How to reach Gokak Falls and the best time to reach.

The nearest Airport is Sambra Airport which is 10km east from Belagavi. And Belagavi is well connected to the rail network of Karnataka.

The best time to visit the waterfall is in the rainy season in July and September, because at this time Gokak falls come to its fullest and speaks for itself.

Things to do, when you are visiting Gokak Fall and nearby places.

Here are the things you should not miss,