Belagavi: Recognizing the achievement of the forest department officers, the chief ministers medal has been presented to the best officers for the first time in the state. In the chief ministers medal presentation ceremony that held in Bengaluru on Monday, three forest officers including, Saundatti range forest officer Sunita Nimbaragi, Retired officer Appoji Patil have been presented the CM medal.
Sunita Nimbaragi in the category of bravery, Appoji Patil and Assistant range forest officer Gurunath Bayannavar in planning category have been presented the award.
It was demanded by the forest department employees to present the CM medal for the best performing officers of forest department similar to the medals presented to the police Department. Responding to the forest employees demand, the government had released the selection list of the year 2018 and 2019 but the medals were not distributed last two years due to the legislative assembly and parliamentary elections in previous two years. Now the medals were presented to the selected candidates of past three years. The senior forest rank officers have congratulated the trio for their achievements. 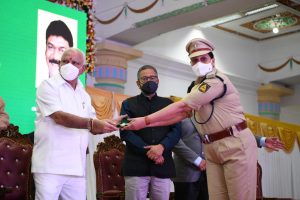