Belagavi: The Karnataka Bandh called give by Pro Kannada organisation and Vatal Nagaraj failed completely in Belagavi.The businesses were ran as usual and the transportation remained undisturbed in Belagavi. The market made good business like everyday.
Activists of Pro-Kannada organisations were taken into custody by the police for staging a protest at Rani Channamma Circle in support to the ‘Bandh’ call given to object the establishment of the Maratha development board in the state. On Saturday morning, the few activists of kannada organisations were gathering near the Channamma circle in Belagavi to go for protest. When they planned to conduct a protest rally from Rani Channamma circle to Gandhi Bhavan, where the BJP’s executive meet was being held, police stopped them. A verbal clash took place between the police and activists on this occasion.
Police asked the agitators to not go for the protest many times and end the protest. But, when the activist did not listen to them, they took the activists into custody and released them later. Leaders of various pro-Kannada organisations shouted slogans against the BJP government condemning its act of establishing the board for Maratha community. It is establishing the Maratha, Lingayat development board for its political gains but not for the development of the communities they alleged.
Mahantesh Rangattimath, Srinivas Talukar, Rajid Hirekudi, Kasturi Bhavi, Raju Kolar, Prabha Kakatikar and others were present. 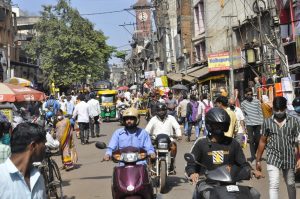 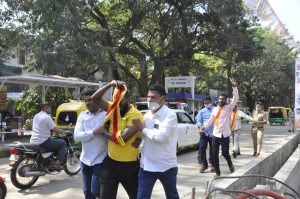