Now Belagavites can reach Nashik city of Maharashtra in hour

Belagavi: The Kunda city Belagavi which has got air connectivity to ten cities of the country already has all set to connect to the eleventh city from Janyuary 25. This time, Star air has came forward to start the flight operations between Belagavi and Nashik under the centre’s UDAN scheme.

Star Air has announced to start this new flight to new route by its tweeter handle. The tweet says that there will be non-stop flight service between Belagavi and Nashik from January 25. Booking for the same has been started.

The flight is announced following the approval from Ministry of Civil Aviation to start the flights to Belagavi from Ojhar Airport in Nashik under the UDAN scheme. With this new route, Belagavi will have direct flight routes to 11 cities of India. The existing routes are Hyderabad, Bengaluru, Indore, Pune, Mysuru, Tirupati, Cuddappah, Surat, Ahmadabad and Mumbai.

This airline will be of great help to amateur and religious tourists of Nashik who want to visit famous Ambabai temple of Kolhapur, beaches of Goa, Gokak falls, Amboli falls, Dudhsagar falls and other tourists destinations in and around Belagavi. While the people of Belagavi and surrounding towns can enjoy visiting Nashik which is also called as ‘Wine capital of India’ and will help to reach Sai Baba temple of Shirdi which is close to the Nashik and also can visit Panchavati where Lord Rama had visited as per Ramayana. 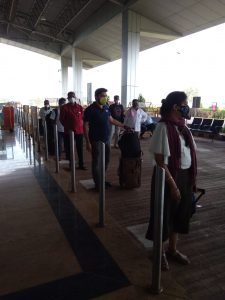