Belagavi: Belagavi youth who went to a picnic at Tilari waterfalls at Tilari Nagar in Chandgad taluk of Kolhapur district, Maharashtra drown in the waterfalls on Tuesday.

The youth died in the incident is identified as Omkar Jagadish Darwandar(20), resident of Shastri Nagar, Belagavi. He had gone to the one day picnic with his five friends which include girls and boys.

There are more than three waterfalls in the forest area of Tilari. These youths, after trekking the distance of three to four kilometres, had reached to a waterfall to enjoy in the falling crystal clear water. This waterfall is situated in the dense forest and many are not aware of it. In a bid to explore the hidden places of nature at Tilari, these youths had gone at this place.

It is also said that many local people warned this group of boys and girls to not at that falls as there is huge depth ben beneath the falls and very risky to enter in the water. But this group neglected them as they wanted to see this falls at any cost.

According to the other members of this group, Omkar had not entered in deep water but was taking selfie in his mobile phone standing on a wet rock in the water. But, his leg slipped and he fell into the deep valley at the falls.

He drowns in the water as he was not knowing swimming. This incident took place at the waterfalls which are located at the distance of two-kilo meters from Green valley resort. The police personnel from Chandgad police station has visited the waterfalls and searching for the dead body. The other members of the group are in a state of shock after they lost their friend on this adventure trip and this could turn their last picnic together in the future. This is not the first incident of the death of a youth at Tilari waterfalls. More than ten youths have died at this when came for a trip in the last two years. 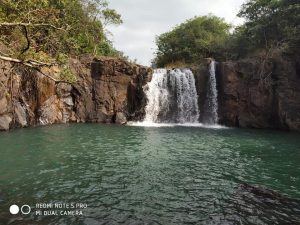