Belagavi: On the last days of the year, between December 30 and 31, 2020, at 10.15 pm, Kittur Rani Channamma urban co-op credit society ltd. situated in Mahantesh Nagar, Belagavi was broke by theif and Gold jewellery and cash worth lakhs of rupees were stolen. The thief who broke the locker of this financial institution has been arrested by Malmaruti Police Station in Belagavi.

This smart boy is having ‘Harley Davidson’ motorcycle worth Rs 6.5 Lakh and might have impressed many boys and girls by driving his bike in the roads of the city and at the college campus. But, he has another face too, he is a professional thief and has broken a reputed financial institute in Belagavi city. This youth is identified as Muzaffar Mohammed Sheikh, resident of Subhash Nagar, Dandeli, Uttara Kannada district and now behind bars. Police arrested and have registered a case against him under Article 454, 457, 380 IPC and investigating the case.

Under the guidance of DCP(Law and order) Vikram Amate and Market ACP Sadashiv Kattimani, CPI Sunil B Patil and team arrested the accused of allegedly stealing the Kittur Rani Channamma urban co-op credit society ltd. Police have recovered gold jewellery weighing 301 grams worth Rs 15,00,000, Rs 1,01,650 cash, and Harley Davidson motorcycle worth of Rs 6,50,000 used for theft. The accused has been produced before the court and further investigations have been conducted. 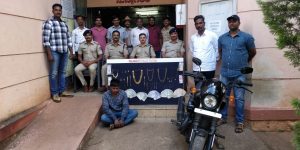