Commenting on the new route, Shrenik Ghodawat, Director, Star Air, said, “Sanjay Ghodawat group and Star Air has received a lot of love from people of Belagavi and Hubballi region over the years. It really makes us happy to connect Belagavi with more Indian cities. This will certainly augment the regional connectivity and aiso catapult trade and tourism for Belagavi.”

With Nashik’s proximity to the major pilgrimage site, Shirdi, Star Air’s flight service will attract fakhs of devotees from Belagavi and adjacent districts and enable them to travel to the spiritual capital of Maharashtra. Conversely, it will also enable tourists from Nashik and adjoining areas to visit Kolhapur, Hubballi and Goa, which are around two hours drive from Belagavi.

He also said that ‘We are happy to connect more and more tier Il and tier Ill cities under RCS-UDAN. The overwhelming response we received from the enthusiastic flyers keeps encouraging us. It truly reflects our ethos of connecting real India. Nashik being pivotal to the billion-dollar Delhi-Mumbai industrial corridor project, we are really excited to start our flight services to Nashik which will definitely aid the industrial activities”

The company plans to operate non-stop fiight services from Beiagavi thrice a week, i.e., Monday, Friday, and Sunday. Moreover, as the flight service operates under the RCS-UDAN, the company is providing inaugural flight tickets starting at just INR 1999*/-.

Mr Simran Singh Tiwana, CEO, Star Air said, “It gives me immense pleasure and pride to see how the company has evolved over the last two years. I’m sure with the love and support of our flyers, this is one of the many milestones yet to come. Also, we are excited to announce our chatbot which is powered with Artificial Intelligence (Al) for a hassle-free customer experience. Our customers can now engage with our customer care through this Al-based chatbot feature and get our latest offers and information regarding their travel with Star Air.”

The company has also forayed into non-scheduled flight services with its launch of Cargo and Charter Services. The airline connects its network with a fleet of comfortable Embraer ERJ145 aircraft. 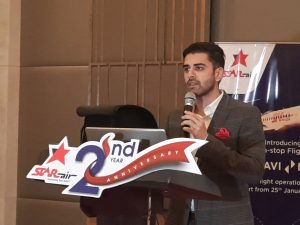