Belagavi: The ‘Bharat Bandh’ call received poor response in Belagavi. Over 36 various organisations and political parties had extended their support to Bandh and but onlyu countable people participated in the protest at Rani Channamma circle. The bus service was closed in the morning but operative after noon on Tuesday.
In the Dharana protest conducted at Rani Channamma Circle, about two hundred farmers and political party workers had gathered and shouted slogans agains the central and state government for bringing the farm bills against the interest of farmers. They condemned the central government for forcefully bringing the farm bills approvals in the parliament.
Farmer leaders grabbed the attention of the media by keeping the stones on their in the Dharana protest at Central Bus stand and then preparing a tea at Channamma circle to offer it to prime minister Narendra Modi. They also chose to ‘Lotangan’ requesting the government to withdraw the farm bills.
Former union minister Babagouda Patil during the protest blamed the central and state BJP government for bringing farm bills all sudden without informing the farmers. ‘The government has plans to make the farmers slaves of the MNC’s through these bills. These bills will create a situation of ‘no food’ for the people of India and will literally lead to starvation in the country.These bills must be rolled back he urged.
Belagavi APMC one the biggest marketing yard in the state was open as usual on Tuesday despite Bandh Call. The onion stock was coming from parts of Maharashtra for Wednesday market. The vegetables arrived in huge stock in the wholesale vegetable market in APMC. But there were very few buyers due to which the prices dropped.The retail market Raviwar peth was also open as everyday in the city. Many farmers were stayed away from the protest as they were busy in harvesting the sugar cane. 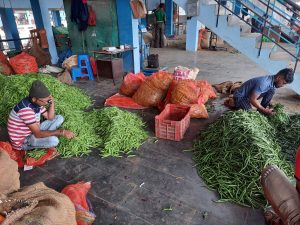 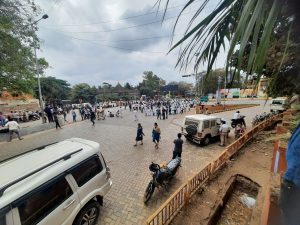