The 816th Anniversary of ancient Kamal Basadi celebrated in Belagavi

Belagavi: December 25th marked the 816th anniversary of the consecration of the Kamal Basadi, a Jain temple built by Bichiraja, a minister in the court of Kartavirya IV of the Ratta dynasty in 1204 CE. The temple is managed by the Shree Shree 1008 Neminath Tirthankar Digambar Jain Mandir (Kamal Basadi) Pooja Committee and comes under the purview of the Archaeological Survey of India.

With the initiation of Rajeev Doddanavar and Vinod Doddanavar of Bharatesh Education Trust, a special post cover was released on 23rd December, coinciding with the 816th Anniversary of the iconic monument. A special picture postcard and a cancellation stamp were also released on the occasion.

A small function was organized at the Kamal Basadi premises on 25th December under the guidance of Vatsalya Varidhi 108 Shri Vardhman Sagar Maharaj and Sangh who are in Belagavi to observe the Chaturmas this year. Acharyashree spoke about the significance of the ancient Jain temple. Munishree Hitendra Sagarji connected the dots between the significance of Lotus, Bhagwan Neminath Tirthankar and the Namokar Mantra recited by all Jains.

The day was marked by pooja and discourses by the Munis, as also dedication to the public of the special post cover, cancellation stamp and picture postcard. Large number of devotees were present on the occasion. 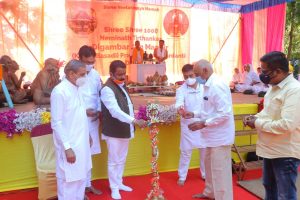