Cultural programme & dance, greeting with folded hands in traditional dress to all departure passengers and arrival passengers performed by the students of PeopleTree Institute of Hotel & Event Management, Belagavi to celebrate the start of Chennai sector. The representative of M/s. Indigo thanked Airport Director, Belagavi Airport and the entire team at Belagavi Airport.

The water salute has been given to the Aircraft of M/s. Indigo on its first arrival at bay no. 2 by AAI Fire personnel. The flight 6E-7131/7132 arrived from Chennai and departed to Chennai. The scheduled arrival is 1025 Hrs and departure is 1055 Hrs. This sector will be operated thrice in a week i.e. Tuesday, Thursday and Saturday. 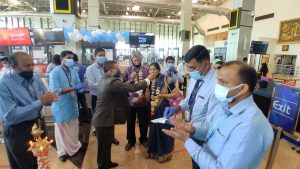